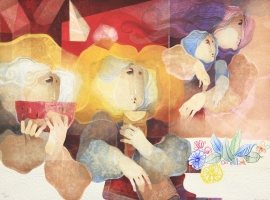 Alvar was born in Barcelona in 1935 and attended the Escuela Superior de Belles Artes. While attending school, one of his paintings was acquired by the Museum of Modern Art in Barcelona in its permanent collection. He was also given his first one-man-show in 1957 before he graduated. After graduating, Alvar was awarded a scholarship to study at the Institut François in Paris.

Alvar has exhibited regularly in Europe, the United States, Canada and Japan. His lithographs, paintings and sculpture have been presented in major shows at the Utah Museum of Fine Arts, Salt Lake City in 1982 and the Wichita Art Museum in 1983. The Kumamoto Museum and the Fukuoka Museum, both in Kyushu, Japan have purchased his lithographs for their permanent collections.