The question of “How do you frame a picture?” is something we are familiar with at Framagraphic. When people bring their artwork into Framagraphic for custom picture framing some know what they want in a frame. Others, however, have no clue. Some people just leave it on the counter and say, ‘work your usual magic and call me when it’s ready.’ (Believe me, we’ve heard this so many times). So, how do we do it?

There is a bit of a science to custom picture framing – although it’s what they call a soft science. There are no hard rules like there are in physics.

One of our custom picture framing specialties is framing Westcoast native art. We do a lot of custom framing for native galleries in Vancouver. So to explain, our process when it comes to picture framing, let’s take the example of a print from The Inuit Gallery in Gastown – it’s called Winter Moons by Coast Salish by artist Maynard Johnny.

Framing to the Piece – Custom Framing

This is a fairly straightforward piece as there are very few colours involved. Winter Moon, as you can see in the image, is comprised of various shades of blue and the white colour of the paper it’s printed on. These are the colours we’ll be working with when creating the custom frame. This process is called ‘framing to the piece,’ where we use only what’s in the piece itself. 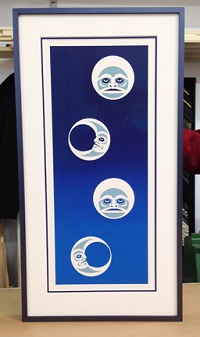 This method doesn’t take into account the colour of your sofa or your hardwood floors or the paint on the wall. All of these other factors in your room can change over time so we create the custom frame according to the piece so that it will work in any space.

For this artwork, we decided we’ll use a double mat around the image to give it more presence on the wall. For the upper mat –the one you’ll see the most of- we’ll use a white mat that matches the paper. Underneath we’ll use a blue mat to pick up on one of the blues in the image – and we’ll only show about 3/16 of an inch, or 4mm – just enough to accent the piece.

The blue we chose is one called Florentine lapis which matches the darker blue in the upper half of the piece. Using a lighter coloured mat similar to the lower half of the image appears to be distracting and takes away from the print.

For the frame, we’ll use a narrow metal frame in a colour called cobalt blue. The thinness of the metal frame helps to accent the narrow vertical lines of this piece. A wider wooden frame in a similar colour would also work but might appear to overpower a piece this small.

It might be challenging for some, and if you’re wondering still “how to frame a picture?” we’re here to help. Book an appointment, bring in your pictures or art, and we will help you decide what is the best colours, matt, and frames for your custom picture framing in Vancouver.

Check back later for more blog posts about custom framing tips and tricks.