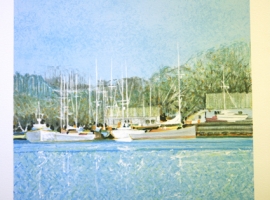 André Bourrie, one of France’s foremost contemporary masters, is a distinguished  maritime and landscape artist. Bearing the distinction of official Painter for the French Navy, he has received innumerable awards, including the Gold  Medal of the prestigious “Salon de la Marine” and the Gold medal of the “Salon des Artistes Francais”

Born in Montpellier, France in 1936, Bourrie was abandoned by both his father (in 1941) and his mother (in 1945). He then lived alone until an uncle placed the young Bourrie in an orphanage.

Working as a ceramist in adolescence, Bourrie gave this up after a philanthropist offered to provide him with a formal education. For years he lived outdoors, traveling and exploring the harbors, seaside’s and beaches of the French Riviera, Vendee and the Languedoc region of France.

Working as a decorative painter, Bourrie devoted his leisure time to drawing and painting“for himself”. It was only when he felt ready that he decided to present his paintings in art shows. In 1979 – six years after being presented with the Silver Medal of the Salon des Artistes Francais; Bourrie felt secure enough to leave the constraints of full time employment.

Today, Andre Bourrie is renowned for his magnificent paintings of the French countryside and seaside. His original oil paintings are represented in the United States and Europe and have been exhibited extensively in Paris as well as New York, Chicago, Beverly Hills, Palm Beach, London, Tokyo, Osaka, and other major cities. His work has also been acquired for the permanent collections of La Ville de Versailles and Le Musee Corot de Ville d’ Avray.