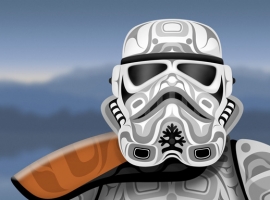 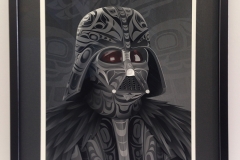 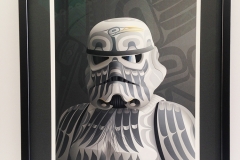 Andy Everson was born in Comox, BC in 1972 and named Na̱gedzi after his grandfather, the late Chief Andy Frank of the K’ómoks First Nation. Although he began drawing Northwest Coast art at an early age, Andy’s first serious attempt wasn’t until 1990 when he started designing and painting chilkat-style blankets for use in potlatch dancing. Since then he has tried to follow in the footsteps of his Kwakwa̱ka̱’wakw relatives in creating bold and unique representations that remain rooted in the traditions of his ancestors.  Andy also has a Master’s degree in anthropology.

Andy’s frustration and disappointment with the treaty process between his Komoks First Nation and the BC government led him to create these three designs. The write-up included in each print tells a different aspect of the story and how each of these characters plays a part. These prints are offered in conjunction with <a href=”http://www.hills.ca/”>Hill’s Native </a><a href=”http://www.hills.ca/”>Art</a> in Gastown, Vancouver.