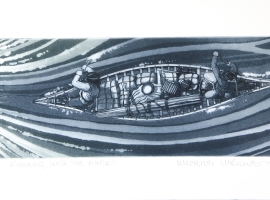 As an artist and poet who drew inspiration from his spiritual beliefs, Michael Robinson believed that “it is important that we see the Earth as a living entity, only then can we understand where we fit in.”

The renowned Metis artist who died on July 27, 2010 at age 62 was a resident of both Manitoulin Island and Keene Ontario.

His artwork consisting of aboriginal images and themes is contained in collections across Canada and the United States including the Canadian Museum of Civilization, the Royal Ontario Museum and the McMichael Gallery.
Exhibitions were numerous and included Manitoulin galleries such as the Ojibwe Cultural Foundation, Kasheese Studio, Gore Bay Museum, South Bay Gallery and the Hettmann Studio.