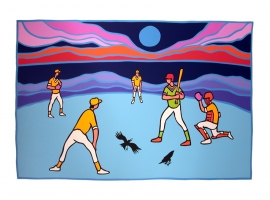 Ted Harrison is one of Canada’s most popular artists. His love of the land and people of the Yukon has brought him national acclaim. His distinctive style of painting is both colourful and sophisticated yet retains an innocent charm, and appeals to young and old alike. Ted credits the work of English painter, Norman Cornish for inspiring his life long quest to paint people and places. But the strongest influence in his life and art was living in the land of the Yukon, where he found his “Shangri-La”. In May in 1969, Ted had his first art showing at the Public Library in Whitehorse and so began his illustrative journey as a working artist in Canada.

In addition to his work as a painter, Ted has written several children’s books and illustrated both “The Cremation of Sam McGee” and “The Shooting of Dan McGrew” by Robert Service. Other projects include his design of Yukon Pavilion for Vancouver Expo’ 86 and the design of a Canada Post Christmas Stamp in 1996.

His paintings can be found in private and public collections throughout Canada, and in New Zealand, Japan, Germany and the United States. In 1987 he received the Order of Canada for his contribution to Canadian culture.