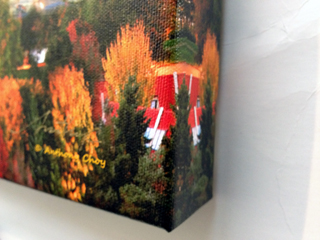 A  gallery wrap is when the image is continued along the edges of the bar, making it appear to ‘wrap’ around. When hung without a frame, the canvas looks finished on all sides. 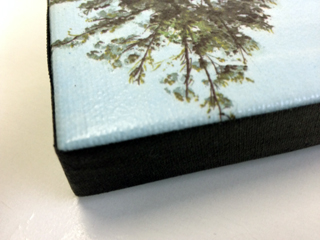 Alternatively, black tape can be used to cover the edges of the stretched canvas. This can help cover unfinished edges, if they have been damaged, or if the image is simply not big enough to wrap around.

There are a number of ways to mount a canvas onto the wall. They are durable enough to withstand being hung on a wall directly, however a frame often makes the piece appear more finished. It also has the added value of protecting it on both the back and the sides.

A floater frame allows the canvas to sit inside the frame, leaving a gap between the four sides of the canvas and the moulding.  Appearing to hover, the canvas can be seen in its entirety. This is particularly useful if the painting wraps around the sides of the stretcher bars.

Traditional framing is also an option when considering works on canvas. Frames can be placed directly onto the face of the canvas. There is no space between the frame and the painting, and the lip just covers the front rim of the image. Historically, a linen liner was used to create a space between the painted image and the frame.

Travelling is an excellent way to be exposed to different art practices. Canvas based artwork can be easily rolled while in transit. It is a material that is much easier to invest in than paper-based work, for example, which can be damaged easily. Once home, the canvas can be stretched and framed.