In August of this year Framagraphic lost one of our most valuable staff members. Keith Schwabe passed away suddenly at the age of 62. He had worked at Framagraphic for almost 10 years.

Keith had a long history of work in the picture framing industry having previously worked for Regis Picture Framing and then various locations of the Framing and Art Centre.

Keith came to us around Halloween of 2010. What struck me most about Keith was that he was very well organized. He imposed a system on our shop that he had developed over the years working at and managing other frame shops. He kept our shop very clean, neat and running smoothly.

His design skills and workmanship were second to none. Keith quickly developed a following of loyal and grateful repeat customers at Framagraphic. He had a design style that I would call classic and elegant. His ability to turn the ordinary into the extraordinary was like magic. He would often work late into the night, after the shop had closed. He preferred to do his best work alone like that. With no customers coming in to interrupt and no phone ringing, he could concentrate on his work. He would often work on someone’s war medals or needlework until 10 in the evening. At other times he would take his work home with him by polishing medals, ironing ribbons or researching layouts and framing techniques on his own time.

We recently had a Celebration of Life for Keith at our shop. We had a full house of friends, family, customers and co-workers who came to share their memories of Keith. We asked people to bring in some pieces of art that Keith had designed for them. Among them was Tom Van Walleghem, a military historian. Tom regularly brings in collections of war medals, photos and stories of soldiers, pilots, nurses and others who served in the wars. He said Keith has probably done about 40 pieces for him over the years. 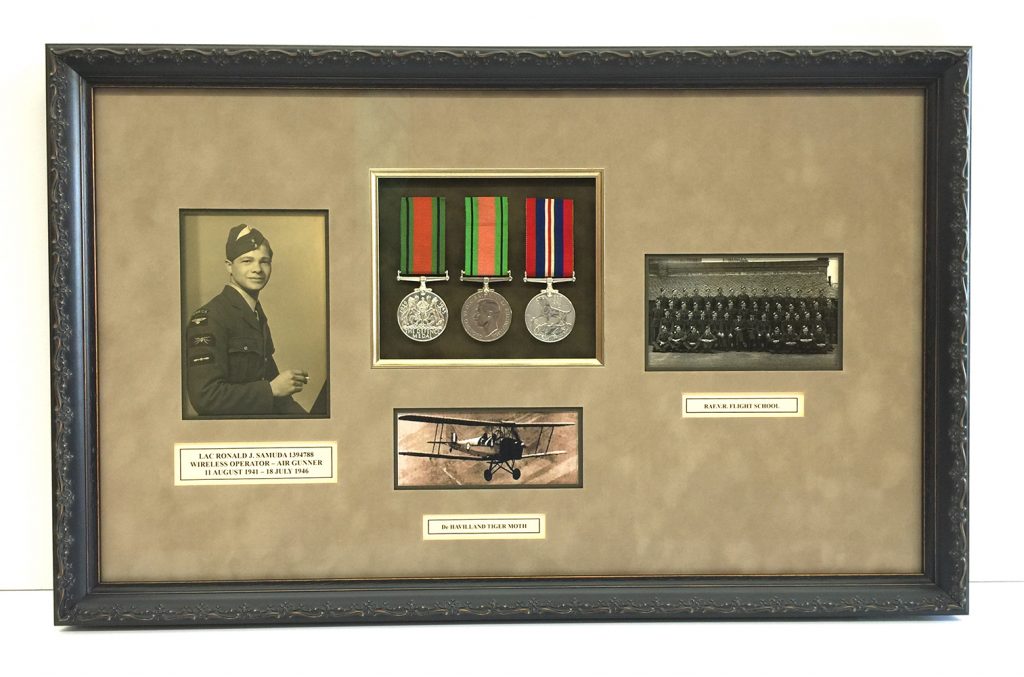 This is one of many military medals arrangements Keith framed for Tom Van Walleghem over the years.

Another of our clients, Tiana Coutts, brought us this collection of Melon feathers from her little green peach-faced lovebird for framing. Keith arranged them all in a simple white shadow box frame with our best glass to show off the detail in the feathers. Each feather is invisibly mounted with tiny drops of adhesive and magic, it seems. 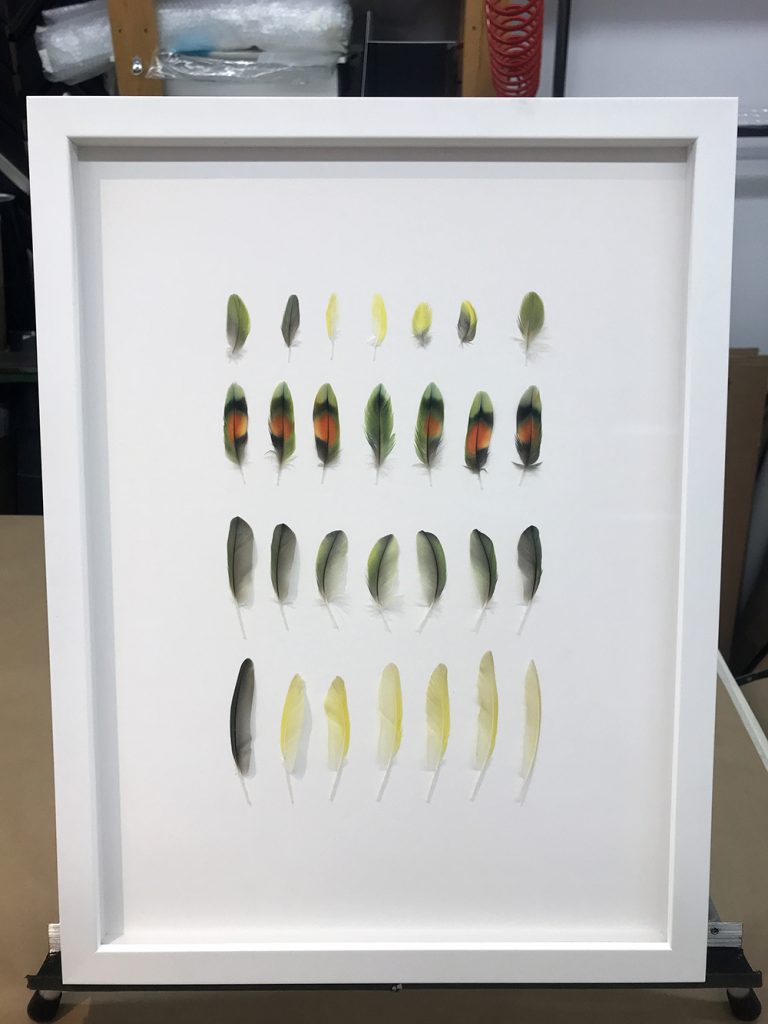 Tiana’s collection of feathers from Melon, a peach-faced lovebird.

Keith enjoyed working with delicate things like needlework and feathers but he drew the line at bugs. No more bugs. On more than one occasion a bug framing project has gone awry. Someone had once asked us to mount a dead dragonfly on a post in a shadowbox frame. At some point in the process, one of the wings fell off. Keith spent hours trying to re-attach it without any else going wrong. Then a leg fell off. Then an eye. Then another leg and on and on it went. Keith eventually re-assembled it with tweezers and tiny points of Crazy Glue. He then colored over the glue dots with a marker to hide them. It was tedious but an amazing recovery. 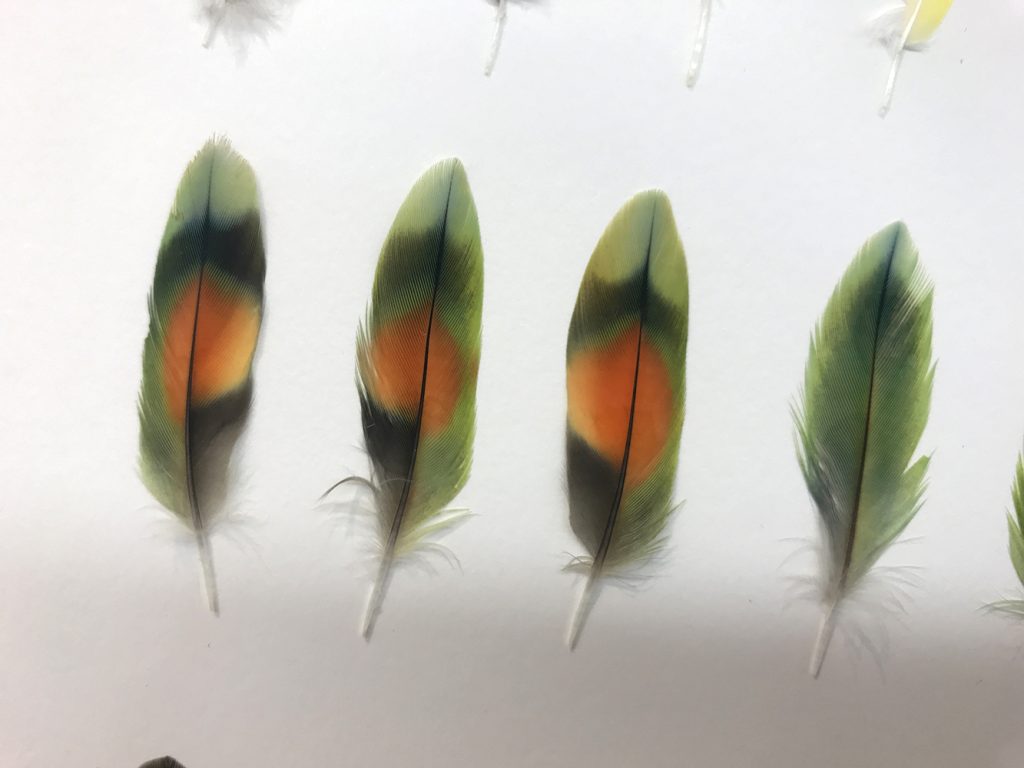 Each feather is invisibly mounted.

Sheila Romalis was another regular client who attended the celebration. Sheila brought in an Inca weaving piece from South America. This item that looks more like a necklace of some kind was actually a kind of abacus used for counting. When she brought it in, Sheila said it was really a bundle of yarn. Keith laid it out meticulously and spent many hours sewing and pinning it in place. The end result is simply beautiful. 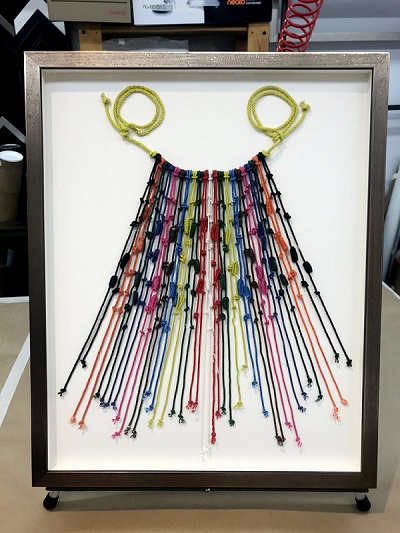 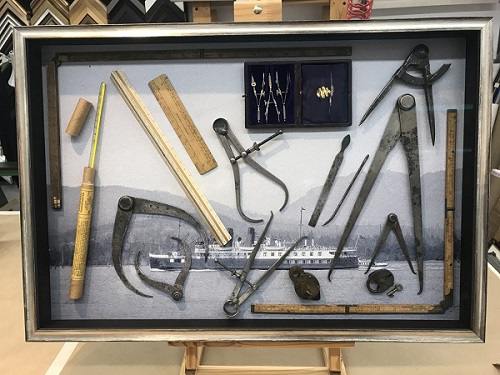 A shadowbox collection of steamship-era navigational tools for working with marine charts.

Also on hand were Terry Begman and Lynn Goodman who regularly bring in pieces for Keith. They had an original Batman poster for 1964 that Keith did a simple but impressive layout with. They usually bring in pieces by an artist known as Shag, but those pieces are quite large and not so favorable for small rooms crowded with people drinking wine, so they left those at home.

Hugh and Diana Alley were also on hand. They brought in their piece we call the Mariner’s Tools. It is a collection of navigation and chart tools that navigators used on the old steamships. Keith had laid out the tools on a photo of the Lady Alexandria, an old steamship Diana’s grandfather used to work on in the ‘40s.

A shadowbox collection of steamship-era navigational tools for working with marine charts. 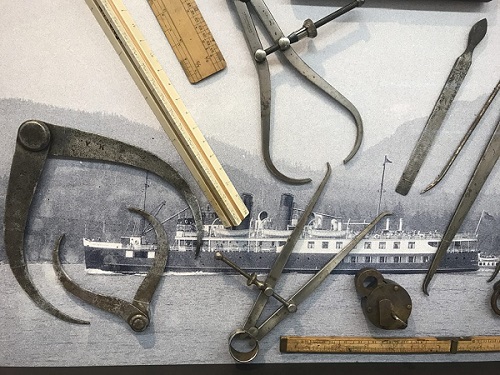 Each item is attached with silicone and fishing line.

Also on display were a couple of Cambodian opium pipes that Carl & Katherine McIntosh had brought back from SE Asia. Keith designed these as deep shadowboxes with a rattan-looking matting in the background and a rustic looking but ornate black frame.  The result is fitting, clean and graceful. 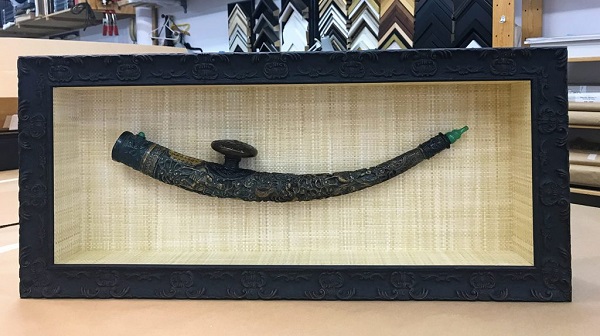 A Cambodian opium pipe carved from a water buffalo horn. 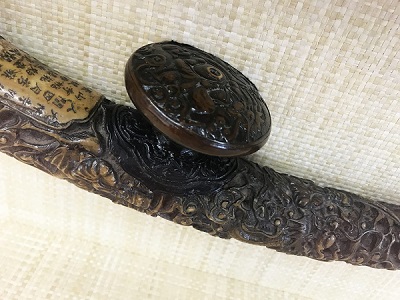 Keith cut a slice out of the rattan backing so the disc portion of the pipe sticks out the back of the frame. It was necessary to do this because the width of that disc was going to make the shadowbox much deeper than the other matching frame. 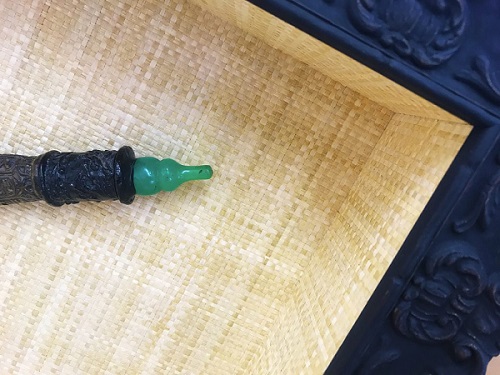 Precision work in this shadowbox frame.

Damian Frith also lent us a piece for the celebration. Damian is a marathon runner and he brought us a collection of his medals that he earned over the years. Keith had arranged them in a classic and simple style. 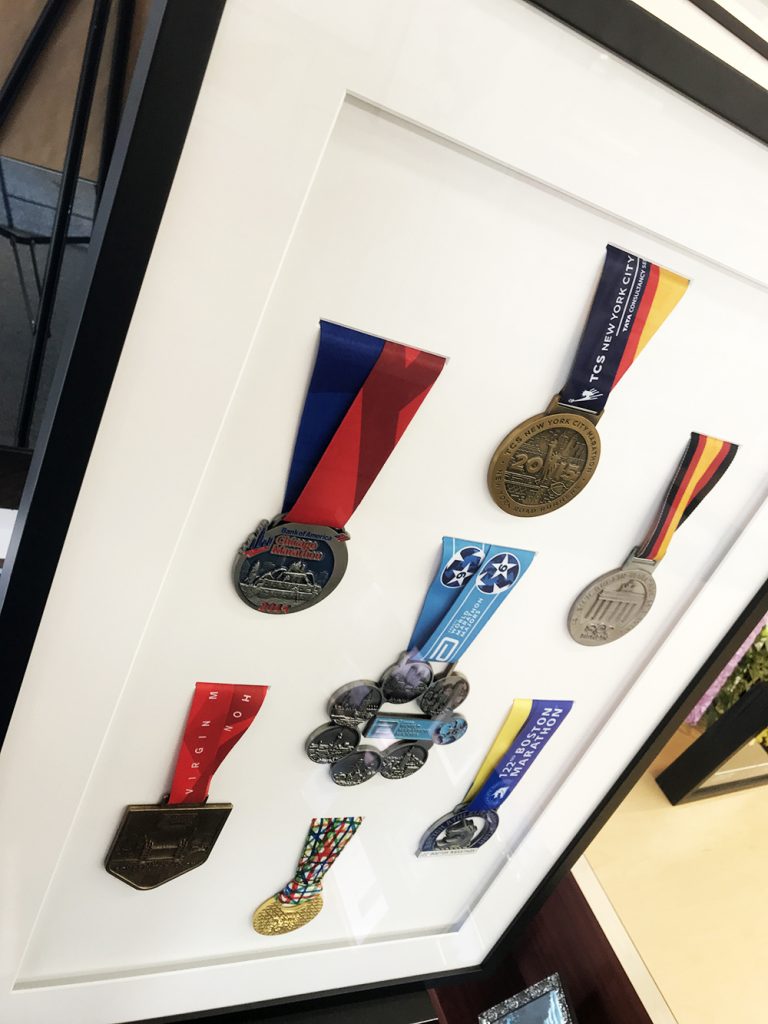 A shadowbox collection of marathon medals from around the world. 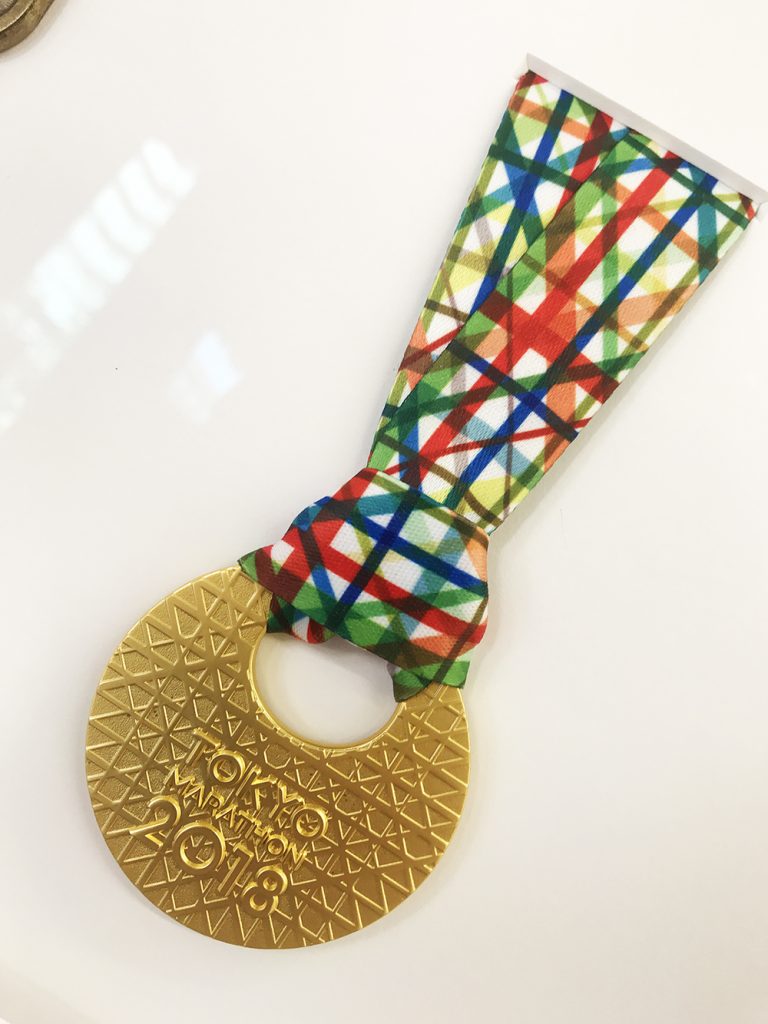 Keith mounted each medal to the backing with a drop of silicone behind each medal so they don’t flop around. The ribbon was pulled through a small slit in the mat board and secured on the back.